For this new and long due article on species identification, I chose to focus on the Indonesian species from the genus Hydrosaurus, also called sailfin lizards or even dragons because of their amazing look. Following a 2020 publication describing two new species from Sulawesi, there are now five species in the genus Hydrosaurus, four of which live in Indonesia and the fifth one in Philippines.

Two of the Indonesian species are more or less regularly found in zoos and in the trade but there are lots of challenges about their proper identification and it seems that “intergrades” (I would be tempted to just call them hybrids as the two species don’t seem to naturally be in contact at all in the wild) do occur in the trade, in fairly big numbers.

The information I am sharing with you here comes from my own observations in Indonesia and from traded animals in Europe, USA and Asia. I have also used the latest publication on Indonesian Hydrosaurus species (dating from April 2020) and describing the two new Hydrosaurus from Sulawesi, accessible at THIS LINK. And as additional help and photo sources, I have also used an Indonesian blog that has proven to be very useful, especially for comparison of phenotypes ! This blog, called Riqnauf is accessible at THIS LINK.

I won’t go through any detailed explanations about the morphology and behavior of Hydrosaurus lizards since the purpose of this article is to help identify the species and clarify the differences between Hydrosaurus amboinensis and Hydrosaurus weberi in particular. For more information, you can refer to the species pages on Pierre Wildlife’s website and the various resources available on google. I have seen only one of the five species of this genus in the wild, in Philippines. Here are two pictures of juveniles and females Hydrosaurus pustulatus found on Negros Island, in the Western Visayas archipelago. 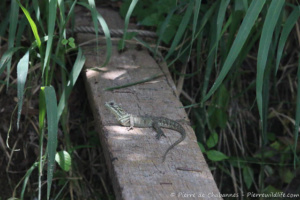 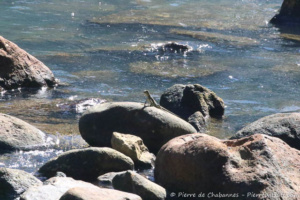 Now let’s focus on Indonesia. In order to properly identify our animals, provided they are not hybrids of course, we need to focus on four main physical characteristics : the shape of the rostrum (presence of a crest-like appendage or flat rostrum), the amount of large conical scales on neck and upper flanks (presence, absence, shape of the scale arrangements), the shape of nuchal and dorsal crests (uniform vs. interrupted) and the coloration pattern (although that can be variable, knowing that most Hydrosaurus species tend to darken with age, some males being nearly totally black).

Let’s start with probably the most misidentified of all these species, the Ambon sailfin lizard (Hydrosaurus amboinensis). It is not only the biggest of all Hydrosaurus but the one with the brightest coloration as well. It also has the largest range of all Indonesian Hydrosaurus, occurring on Ambon and on New Guinea. True Hydrosaurus amboinensis are actually rare in captivity and very difficult to come by, yet they are actually quite simple to recognize. First, their nuchal and dorsal crest in totally uniform with no areas with smaller spines or scales or less raised spines. Second, their coloration pattern is unique, usually bright green getting yellow or even light orange on lower flanks with black spotting often merging to form a well recognizable reticulated pattern. Third, this species, even for bigger males, has no appendage at all on its rostrum and has a “flat nose”. And last, this species has no visible clumps of conical scales visible on its neck and its flanks which is the easiest and most accurate way to tell it from all the other Hydrosaurus species. Here are some photos taken from the Indonesian blog called Riqnauf, featuring some truly remarkable specimens : 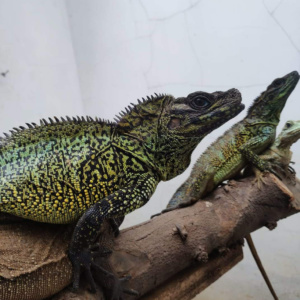 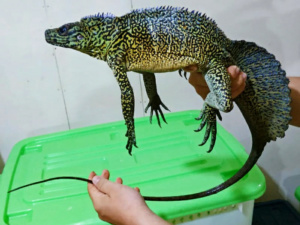 The other often misidentified species of Indonesian Hydrosaurus is the Weber’s sailfin lizard (Hydrosaurus weberi). This is, in fact, the commonest species of its genus in captivity today, at least outside Indonesia. In the wild, the species is endemic from Halmaheira and Ternate islands, in the Moluccas Archipelago. There are two major ways to tell apart Hydrosaurus amboinensis and Hydrosaurus weberi : 1/ H. weberi has a disjunct crest with the nuchal and the dorsal part being separated by a “lower” area with much smaller scales and 2/ H. weberi has a distinct row of clear conical scales on the sides of the neck then isolated conical scales forming some sort of a line on its upper flanks. Furthermore, Hydrosaurus weberi has little to no appendage on its rostrum (allowing for an easy differenciation with the two species recently described from Sulawesi) and its coloration, although variable, is usually much duller than H. amboinensis. Its head and legs are often quite dark (especially for males) and its flank color can go from yellowish to nearly grey, often with a “peppered” aspect due to the black edges of each clear flank scales. Again, here are some photos from the Riqnauf blog showcasing exceptionnal individuals belonging to this species : 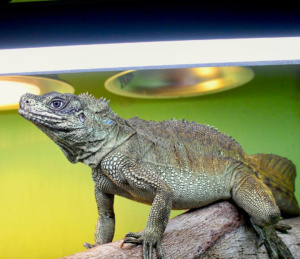 Here is a male Weber’s saiflin lizard from Jakarta Zoo (this is the most typical form found in captivity in Indonesia and often in zoos worldwide) : 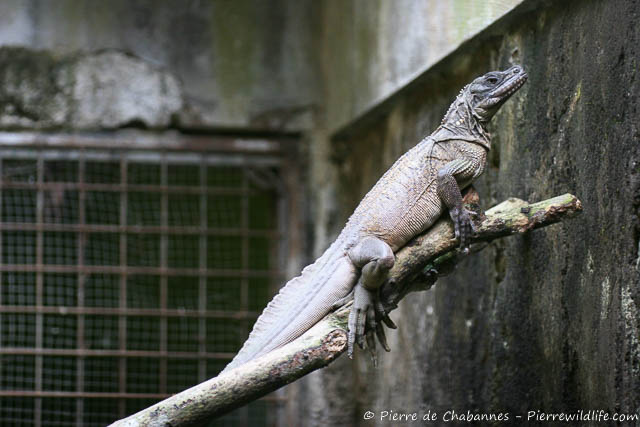 And here is an unusually coloured specimen from Dallas Zoo, labelled as H. amboinensis but clearly showing some “weberi” features such as the conical scales and already visible crest interruption between the nape and back. This specimen could actually be a hybrid. 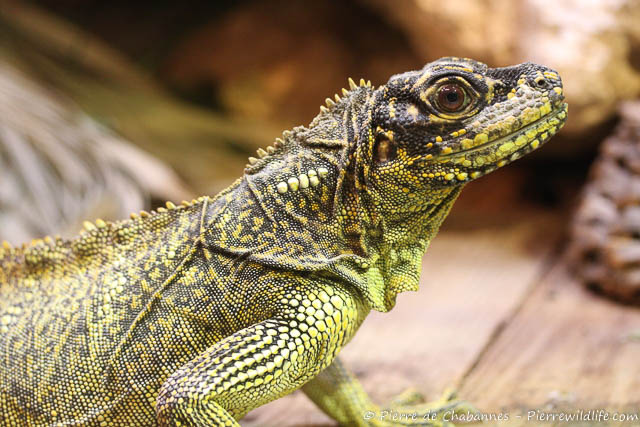 Next are the two new species that are endemic from Sulawesi. Those two have been described long ago but were only recently resurrected, in a publication going back to April 2020. Both of these species are found in the trade but are globally rare in captivity, especially outside Indonesia where they are very seldom seen. Both of these species share a common trait, the presence of a well developped appendage on the snout giving them a distinct head profile and allowing for an easy differenciation between them and the two previously analysed species, namely H. weberi and H. amboinensis.

Hydrosaurus celebensis is likely the most striking of the two Sulawesi species, and also possibly the rarest under human care (although that needs to be investigated). This species usually is very dark in color (it often has completely black tail, head, breast and limbs) with a paler and “peppered” (often light yellow-white to grey-white) area on middle flanks. This species has small clumps of conical scales on upper flanks, linked to thin vertical lines of large scales going to the bottom of the flanks. These scales are clear in color but in really colorful specimens, these clumps of scales can turn light blue. Again, here are some photos from the Riqnauf blog showing stunning adults : 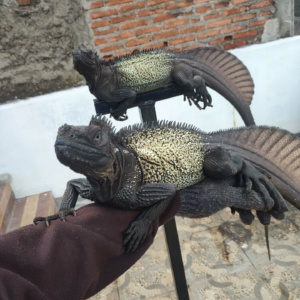 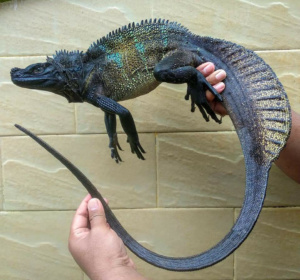 And a photo of an unidentified Hydrosaurus from an Indonesian zoo that could be H. celebensis although its identification is far from sure yet. 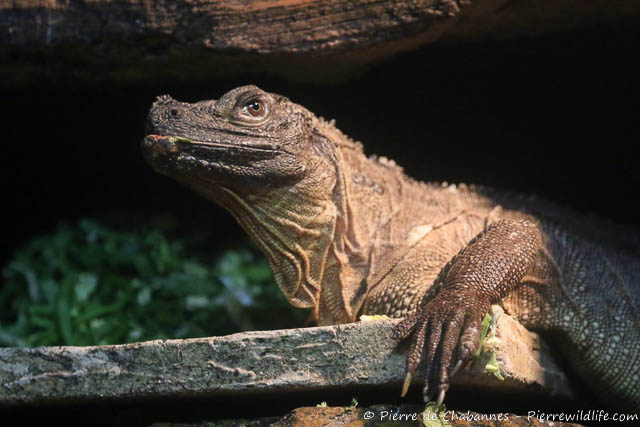 Hydrosaurus microlophus, from Sulawesi too is superficially similar to H. celebensis with its round appendage on the snout and its globally dark coloration although H. microlophus often has a lot less black (usually restricted to the face, limbs and end of tail) on its body. Its flanks and breast are dirty yellowish to olive with less of a peppered aspect. But the easiest identification criteria to look for is the presence of large clumps of black conical scales oriented diagonally on the upper flanks. These scales look a lot less neat than those of any of the other Hydrosaurus and their diagonal orientation and darker coloration is a good way to tell too. Let’s first see some more stunning specimens, courtesy of Riqnauf blog. 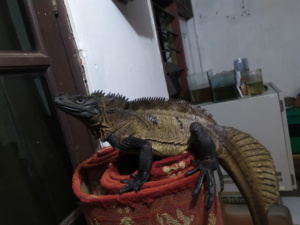 And a really beautiful and characteristic adult that I was fortunate to photograph in Batu Secret Zoo, in east Java. 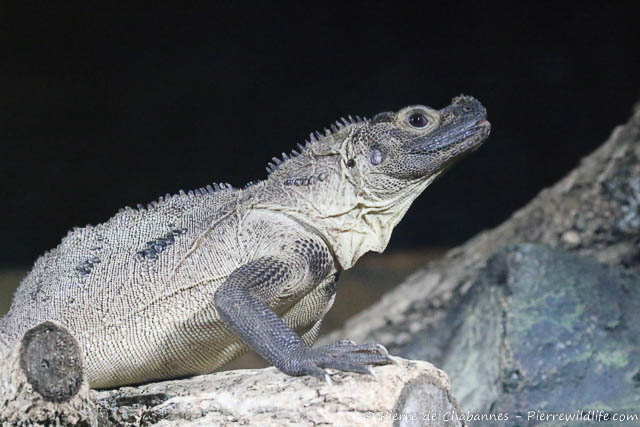 And to finish this article, here is a collage found on Riqnauf blog showing you the four species of Hydrosaurus lizards from Indonesia side by side ! Top left : Amboinensis, Top right : celebensis, Bottom left : microlophus, Bottom right : weberi. 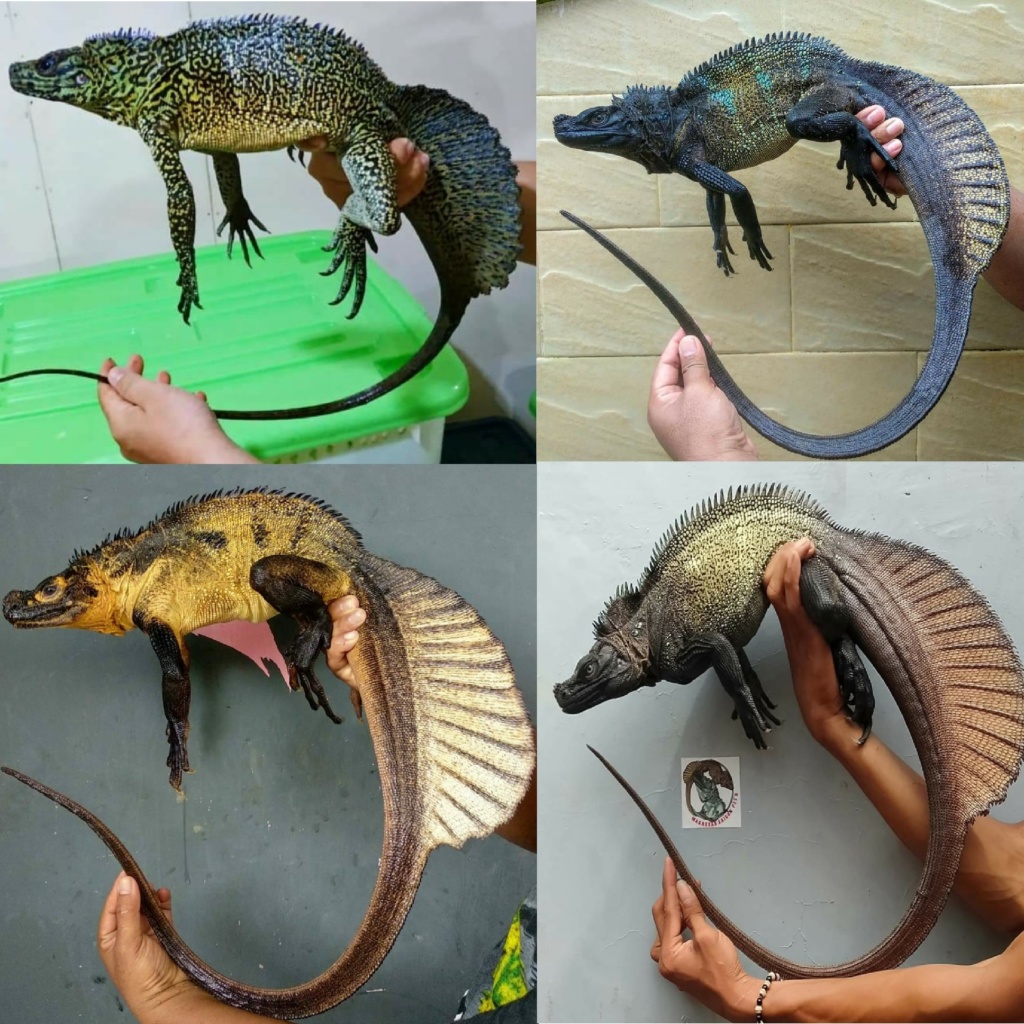 Thank you to the owner of Riqnauf blog for showing us such extraordinary animals, thank you to my friends from the Hydrosaurus messenger group for the help and for taking me into this, and thank you to my wife for encouraging me to dig deeper into Identification issues !

I hope this article will help you sort out your Hydrosaurus identifications until we get to learn more with future publications ! In the meantime, take care.