I thought I would talk briefly about the groundbreaking work done by Matt Shirley and his team on the Slender-snouted crocodile populations in Africa and the implications that work and the publication have on the captive populations of this species.

Slender-snouted crocodiles (Mecistops cataphractus) are found in western and central Africa and are currently listed as Critically Endangered by the IUCN on their Red List. The link to the species’ assessment page is available Here.

Matt Shirley and his team managed to study both populations of Mecistops and ended up reviving the formerly synonymized species known as Mecistops leptorhynchus. This species was described in the early XIXth Century if I am not mistaken and the name applies to the Central African population, the one from West Africa retaining the name Mecistops cataphractus.

In terms of conservation, this is quite big as we are already struggling to preserve what is now known as the “Mecistops cataphractus species complex”. Now that the populations are distinct species, things become even more difficult and two different conservation strategies need to be implemented to make sure both species survive in the wild. It seems logical, due to the species-complex assessment by IUCN, to say that the newly revived species is most certainly critically endangered as well.

I have been lucky to talk to Matt Shirley about his work and about the identification of captive specimens of Mecistops species around the world. The information I am about to disclose is the result of our conversation and additional (ongoing) researches online and through my contacts network.

First, concerning the American captive population of Mecistops, according to Matt, all specimens have been tested and happen to be pure Mecistops cataphractus (West African population). The specimens kept at Bali  Reptile Park haven’t been tested but Matt ID’d them as Mecistops cataphractus as well with very little to no doubt at all. There could be other specimens in Asian zoos but I haven’t seen them yet so they were not included in our conversation. 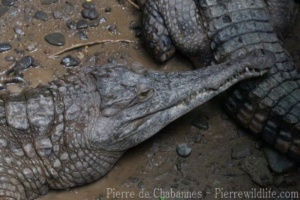 The Slender-snouted crocodiles (Mecistops cataphractus)
in Bali Reptile Park, in 2017.

The European population is more interesting in terms of history and identification. According to Matt, but no genetic testing has been performed to back this claim up so far, most if not all living cataphractus from European collections look like Mecistops cataphractus, Western population again. We can only hope that the studbook keeper for this species in Europe will soon be able to conduct genetic testing to ensure that we don’t keep hybrids indeed.

But there is one exception to this ! Rotterdam zoo used to display two very old Mecistops that were brought as a gift by superstar singer and dancer Josephine Baker in the early 1930s. Their origin is apparently unknown and both of these specimens lived to become the world’s oldest captive crocodiles ever known (they are featured in the Guiness book of records). These crocodiles were named Hakuna and Matata. One of these crocodiles looked definitely like a pure cataphractus but the other one, according to Matt and his team, really looked like Mecistops leptorhynchus. Unfortunately, no genetic testing has been performed so far to back up this information but the scientist told me that this identification is almost sure (90%). If verified, this would be the only known and verified Mecistops leptorhynchus ever kept in zoos. 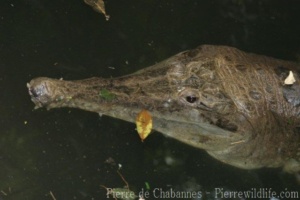 Here is my best photo of what could well be the world’s only known
captive specimen of Mecistops leptorhynchus. It died of old age in 2013
at Rotterdam Zoo (Netherlands).

Now, what we need to do, knowing that and besides genetic testing, is investigate the origins of the breeding pair from what used to be Noorderdierenpark Emmen. This pair sired what is probably the majority of known Mecistops in European zoos today. Phenotypically, they and their offsprings look like pure cataphractus but we should test them because if they have been produced in Rotterdam from what would be a hybrid pair if genetic testing confirm the leptorhynchus ID, then it would mean that the European stock would feature a majority of hybrids that would be worthless for breeding and conservation purposes. I am hoping that this matter will be investigated soon before further breeding efforts are carried in European zoos.

Other specimens that must be investigated are the ones born at the Ferme aux Crocodiles park in Pierrelatte, France. I have been told that the park used to house three old wild-caught specimens and many babies were born there. Some of them were temporarily on display at the Aquarium Tropical in Paris, France, back in 2007. Let’s hope that the founders of this particular group all belonged to the same species ! 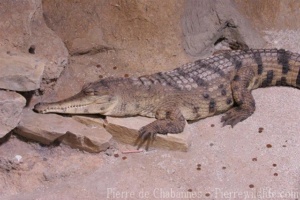 One of the two subadult Mecistops cataphractus born at Pierrelatte’s
Ferme aux Crocodiles and displayed for a few months in Paris’ Aquarium tropical.

To sum up, I would say that this issue with a new species being either revived by spliting or described clearly shows you why taxonomy should never be overlooked and proper identification and tracking of breeding specimens should always be a primary concern for all zoos that are serious with captive breeding for establishing insurance populations of critically endangered animal species. Any hybrids in the mix would make the efforts nearly worthless and could spell doom on wild populations if any reintroduction is to be performed.

Let’s follow up with this Mecistops case and feel free to share any reliable information on the Facebook group of Pierre Wildlife or on any other relevant group. For those of you who are interested in getting the scientific publication for the description of this new species, you can follow THIS LINK. And if you want to find out which zoo currently keeps Mecistops in Europe, you can check out our partner Zootierliste at THIS LINK.

Thanks for your support as always !